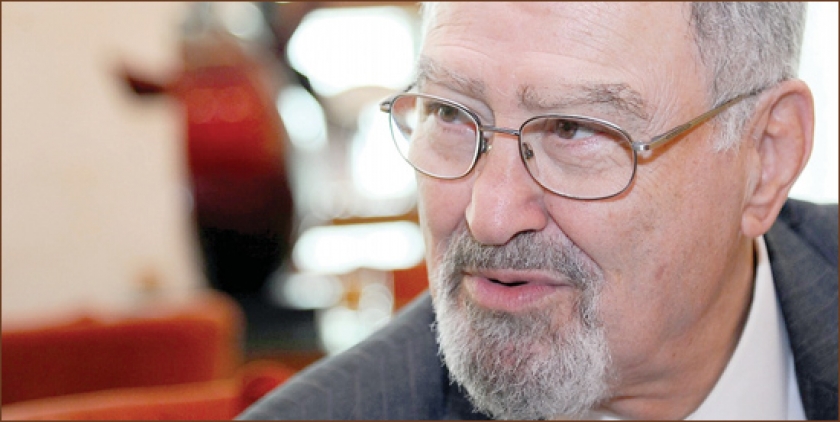 Sam Zakhem , the former USA ambassador to Manama said that the only way to reach solutions for the problems of any country is dialogue, not violence and sabotage, which is very strange for Bahrainis.

Mr. Zakhem, who comes to Bahrain with an invitation from the Board of Trustees of the Isa Award for services to Humanity, pointed out the significant role of His Highness the late Shaikh Isa bin Salman Al Khalifa in the eighties to secure the freedom of navigation in the Gulf, despite all the threats and challenges facing Bahrain at that period of time. Sam Zakhem revealed his intention to form a committee of former American Congress Members to present the facts and political reality in Bahrain in a neutral way.

Why did you choose to write about His Highness the late Shaikh Isa bin Salman Al Khalifa, although you have dealt with a number of politicians and presidents from many countries?
I personally consider the late Shaikh to be George Washington of the Arabs or Shaikh Zayed Al Nahyan for the United Arab Emirates. The late Shaikh did not discriminate between rich and poor people and persisted on meeting all people. In fact, he was the greatest with regard to modesty, wisdom and his love to his people and vice versa. Although he used to rule Bahrain, any person could reach to him and talk to him easily. We don’t see princes or presidents who act as simple as that. He used to drive his car by himself without any guards. I recall that one time he invited me to Al Jasra and I told him that I don’t know how to get there so he asked me about the places I know and I told him I would meet him near the National Stadium. I went there with my wife and children and waited for him to come with escort and guards. Some time passed and no one came. There was a car parked a little bit away from us so I thought that he has sent a driver or an escort to meet us. I went closer to find out that he was driving it himself. I couldn’t hide my astonishment and I didn’t wait long to ask him “Your Highness, how did you come without any escorts or guards?” and he replied “why do I have to come with guards? This is my country so I shouldn’t feel scared when I’m walking among my people who love me and whom I love”. He was a symbol of modesty. I still remember what the former President of the United States of America, Ronald Reagan, used to say whenever we meet “you are lucky, Sam, that you are dealing with the kindest person on earth”. The late Shaikh was respected and appreciated by Reagan and the former President, George H.W. Bush. He was very wise and cared so much about his country.

You were the USA ambassador in the eighties, and it was certainly a challenging period. How do you see it today?
Certainly. At that time, the Iran-Iraq war was taking place and there was a huge challenge regarding the shipping traffic in the Gulf, especially the oil tankers. I think that the late Shaikh contributed significantly in that period, and he enabled us to protect the oil tankers and shipping traffic in general. We needed the support of the Gulf countries and the support of the late Shaikh was limitless, despite all the threats that Bahrain received from Iran at that time because of the magnificent cooperation of Bahrain. The late Shaikh cooperated with the USA and had played a huge unforgettable role.

The eighties was a challenging period, and today is a challenging period as well in the light of the different balance of power in the region. How do you see what Bahrain is facing today?
Unfortunately, what Bahrain is facing today are interior challenges. Bahrain is one country and its people have the same origin and traditions. Unfortunately, people concentrate on the little things that separate them and forget about what unite them which is much bigger and more important. The country is divided and some areas suffer from some unfortunate events such as blocking roads and burning tyres. The divided house is very difficult to restore. All we pray for is for Bahrain to go back to its safe past.

Before being a diplomat, you are a person who lived among Bahrainis. Don’t you see that what Bahrain is facing today isn’t anyhow like Bahrainis?
Let me explain something, any regime in the world has its mistakes. There’s no such a thing as a perfect regime without any mistakes. A perfect regime exists in heaven only, and we live on earth not heaven. I might have made mistakes throughout my career as an ambassador; I might have made mistakes when I was in charge of my country’s policy in the Gulf region. We all make mistakes and all governments make mistakes. However, you can’t correct mistakes by throwing fire bottles, burning tyres or spilling oil on the streets. Problems can’t be solved without a dialogue with the concerned authorities. You put forth the problem, suggest solutions and state your demands. I am absolutely sure that His Majesty the King is an understanding person. I recall very well that when he led the reformations in Bahrain, I sent him a letter saying “I feel that your father is looking at you proudly from heaven and saying to you `well-done`”. The Bahraini people deserve the best because they’re among the kindest people on earth. They are modest, kind, loving and simple and they open their heart to everyone. I feel deeply sad; this isn’t the Bahrain that we once knew. I used to walk in the allies of Al Meqshaa and feel totally safe. Even my children used to go out at night and we didn’t feel worried about them. Bahrain has a history that goes back to 5000 years, and the East is the source of all cultures, so why don’t we talk to each other in a civilized way instead of resorting to violence?

You left Bahrain in the eighties and you definitely have visited it many times after that. What did you think of the development in the different aspects of life through the past ten years?
Bahrain has certainly witnessed a huge economic and construction development. Surely many life and political aspects were not available as they are at the time being. The reformations led by His Majesty the King are like no any other reformation, although Bahrain doesn’t have a strong economy such as Kuwait, the United Arab Emirates, Qatar and Saudi Arabia. With the little it has, we thank God that life and freedom in Bahrain is good. We surely can put more effort to reach more well-studied reformations. Unfortunately, what Bahrain is facing has its impact on the economic status, which is extremely bad. Two days ago, I was trying to go somewhere and the road was blocked. This isn’t a healthy situation. Things should go back to normal, as any country can’t move forward when it is divided. Some people have fair demands and they should be listened to. The people are the most important thing in the country, they’re more important than the government. The government’s role is to serve the people. We need clear minds. When we are on a ship, no one can say that he hates the captain and therefore he will sink the ship. The ship must continue its way in order to save everyone.

Don’t you think that the appearance of sectarianism in the Bahraini situation shows that another country is interfering with what Bahrain is going through? Or is a result for the changes taking place in another country, Iraq for instance?
Definitely. There are external interferences in the region. However, this should not be allowed in Bahrain. In 1971, the majority voted for Al Khalifa closing the door in the face of the Shah’s allegations. There was no religious discrimination. Now if the government makes a mistake, it must admit that. This is the core of the professionalism. I have no doubt that His Majesty loves his people, whether they were in the cities or villages no matter how big or small they are, so that Bahrain goes back to its beautiful past. If there are problems, everyone shall work together side by side to solve them. Because I understand this country and love it, I have seriously considered forming a committee consisted of former members of the American Congress and visit Bahrain and listen to all sides neutrally. I personally love Al Khalifa and love the Bahraini people and I don’t think that it’s difficult to find a solution in a country like Bahrain, where everyone is loving, kind-hearted and modest. We rarely find modesty in other countries. Could anyone enter the  White House to drink coffee with the President like what was happening with the late Shaikh? I’m sure that if we work together, there will be solutions. If there are mistakes in the government, let’s fix them. And the people should learn that the resources of this country is not like Kuwait and Saudi Arabia, so we must sit down together and agree and reach a solution to build and strengthen this country so that all Bahrainis would benefit from that.

Are there any others you are considering to include in the committee?
Yes. I have considered Gary Hart (1988), the former presidential candidate, another politician called Hamilton who is a researcher and an expert in the Iranian affairs and George McGovern, who ran against Nixon in 1972. The committee aims at working neutrally and taking the facts and presenting them in front of the Congress to show a clear picture about what’s taking place in Bahrain. As they say “Justice delayed, is justice denied”. Some people say that there’s justice, but it’s slow. There might be some opponents who seek reformations and there might be some opponents who just seek opposition. We will not disagree with anyone. Having opponents is a healthy matter, but there should be respect to the authority and laws. I might not be fond of Obama, but I respect him. The United States of America isn’t perfect, we are Democrats and Republicans and we have our differences. No one says he wants the other “dead” and if you tell me you want a dialogue, but ask me to cut off someone’s head before proceeding with it, I will tell you that it’s impossible for us to conduct a dialogue.