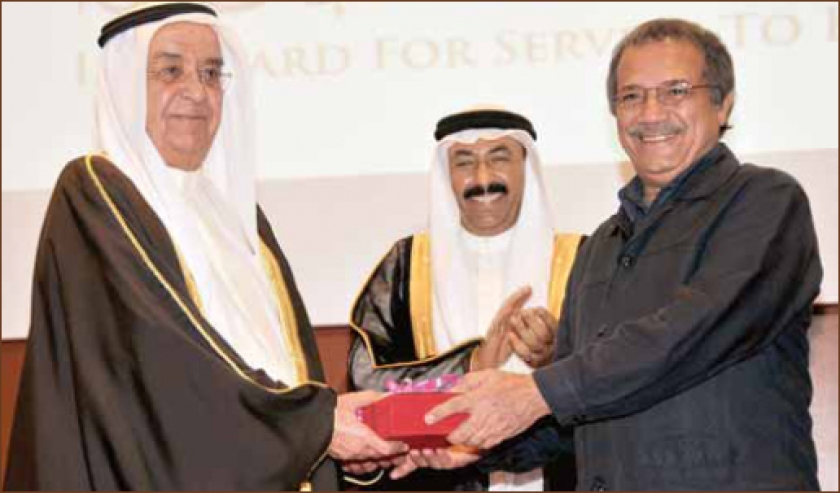 Abdulla Yusuf, the fine artist and designer of the winning logo of the Isa Award for Service to Humanity expressed how honoured he felt for winning the competition, and stated that his design was inspired from the portrait of the late Shaikh Isa bin Salman Al-Khalifa, pointing out that the design combined between realism and humanitarian implications inspired from the features of the late Shaikh.

The artist said to “BNA” that he got excited when he read the advertisement of the contest in the newspapers and decided to participate as a fine artist who was a contemporary with the late Shaikh Isa bin Salman Al-Khalifa and witnessed the humanitarian, spontaneous character of His Highness, his vital achievements which were reflected on the image of Bahrain around the world, and the love of all of the Bahraini people in particular and the people of the Gulf in general. He saw in the features of His Highness the most honest expressions any portrait can show to express humanity.

Yusuf emphasized on the simplicity of the logo he designed and on the fact that he tried to reflect the smile and satisfaction appearing in the portrait of the late Shaikh Isa bin Salman Al-Khalifa. He said that the idea of the design took him a long time until he found that the best design is the portrait of the late Shaikh, so he started designing it in a fine frame especially designed by him.

The artist pointed out that he had designed the logo manually at the beginning before using the modern techniques and some designing computer programs to reach the final design that can be used in publications and in the website.

Yusuf expressed his pride that his design was chosen for an international award to commemorate the late Shaikh Isa bin Salman Al-Khalifa, hailing the key humanitarian achievements and aiming at serving humanity through research and diverse sciences.

The Artist
Abdulla Yusuf is a Bahraini artist of various interests. He is a founder member in Awal Theatre and Bahrain Fine Arts Association, a theatre and television director, a fine artist who participated in several internal and external exhibitions and won many first place awards. Yusuf is also a theatre and television décor designer, a presenter in radio and television programs and had participated in a number of radio and television entertainment and drama programs in Bahrain, Kuwait and Ajman. In addition to that, he directed various series, drama shows and documentary films to Bahrain Television and the GCC Joint Program Production Institution. Abdulla Yusuf has many other contributions in the field of designing covers for books, poetical works, periodicals and posters.

In 1997, Yusuf designed and executed scenography of the fine arts exhibition “Faces” featuring artist Ibrahim Bu Saad, poet Qassim Hadad and musician Khalid Al Shaikh. He also directed a play under the same name in the same year presenting poems by Qassim Hadad and he won the Best Director Award when it was played in the Fifth Gulf Theatre Festival in Kuwait. In 1999, he won the Best Scenography Award for “A Day of Our Time” by Saadallah Wannous which was shown in the Sixth Gulf Theatre Festival in Muscat. He directed a series called “Layl Al Banader” for Bahrain Television in 2001 and a series called “Ouisha” in 2003 and 2004. Recently, Yusuf designed the logo and decoration of the Bahrain International Music Festival which took place between 2nd and 7th of October 2004.