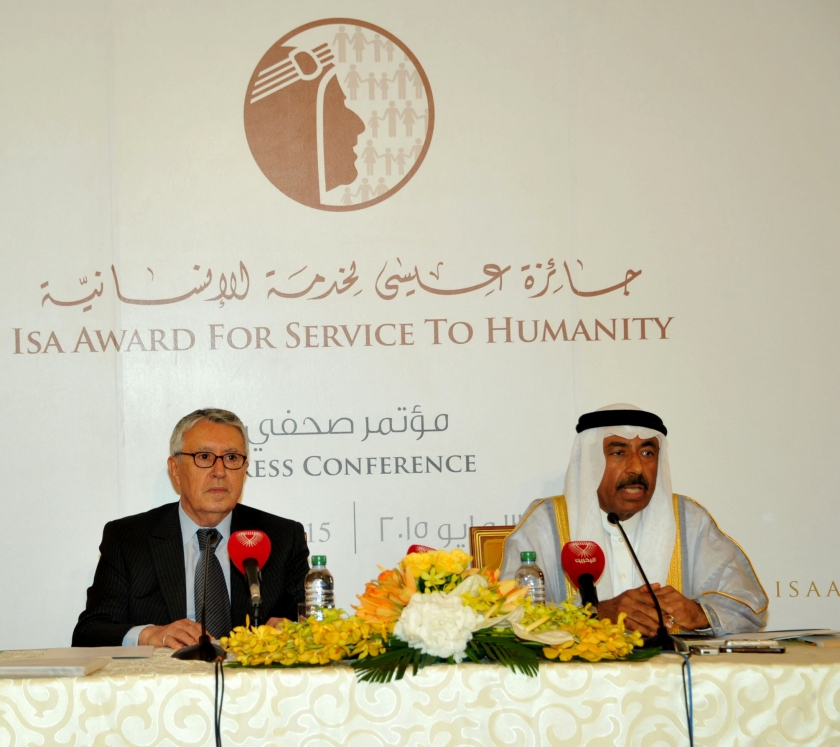 Deputy Premier and Chairman of the Board of Trustees of Isa Award for Service to Humanity Shaikh Mohammed bin Mubarak Al Khalifa has announced that the Board decided to grant the second edition of the Award to Dr. Achyuta Samanta from Odessa, India, in the fields of social welfare and fighting against poverty and destitution.

During the press conference held today in the presence of the Mayor of Assilah in Morocco and the Secretary General of the Assilah Forum Foundation and Jury Committee Member Mohamed Benaissa, Isa Award for Service to Humanity Secretary-General Ali Abdulla Khalifa said that Dr. Achyuta Samanta will be presented with the second edition of the Award in an official ceremony under the patronage of His Majesty King Hamad bin Isa Al Khalifa, to be held in June 3, which marks His Highness the Late Amir Shaikh Isa bin Salman Al Khalifa’s birthday.

He said that a large number of individuals and institutions working in the field of relief and humanitarian services had applied for the Award in its second edition, which affirms the status it enjoys among the workers in the humanitarian field across the world.

He asserted that the Award seeks to appreciate and honour those who want to make the world a better place, through their education and tireless efforts in order to make the world better for the coming generations.

He pointed out that the Isa Award for Service to Humanity has been established with a three-fold goal, to create awareness of extraordinary humanitarian endeavours across the world, to inspire more people to achieve excellence in humanitarian accomplishments, and to honour individuals and institutions who have singularly demonstrated an ability to make a positive impact in the world, and its granted once every two years.

Award Secretary-General described the stages before granting the award, saying that the Board of Trustees formed at the beginning of last year a jury committee composed of international experts. They held their deliberations in meetings held in Bahrain, under the chairmanship of Principal Consultant Prof. Jan Paulsson.

The jury committee gave the results in a short list of the names of three candidates to receive the award, included in a special report submitted to the Board of Trustees.

The Board of Trustees will assign a group to undertake a field visit to the project site and conduct a personal interview with the potential applicant. The group will comprise members of the secretariat, advisers and other competent professionals with experience in diverse area.

Benaissa spoke about the jury committee applying the nomination criteria to the candidates and the field visit to back the decision of granting this award.

Every year there are those who make remarkable contributions to improve the circumstances of others. These honourable individuals not only see pain, strife and hardships in this difficult world that we live in but are stirred to bring beauty where there is none, and hope where there’s despair. The Isa Award for Service to Humanity has been instituted to honour these exceptional people, and celebrate their selfless and tireless efforts to create a better world for future generations, noting that the first edition of the Award was given to Malaysian Dr. Jemilah Mahmood.

Isa Award Laureate Dr. Samanta’s vision is to provide quality education and opportunity to the poorest of the poor indigenous tribal children for their all-round development and empowering them with vocations and skills for life so that they can live harmoniously with the mainstream communities of world. Love and care has helped the tribal children to shine in every field, from representing nation in international sports or to excelling in various qualifying examinations; the indigenous tribal children have vindicated Dr. Samanta’s firm belief that given proper opportunity they also can perform at the same level as or even outshine the developed species.

The award has been named after His Highness the Late Amir of Bahrain, Shaikh Isa bin Salman Al Khalifa may God rest his soul in peace. It celebrates his long dedication to humanitarian causes and commitment to a world of tolerance and solidarity.

Participation in the award rules state that the project should be purely humanitarian in its scope. It should not be political in nature or affiliated to any political party. The beneficiaries of the project should not be limited to any one country but expanded to include a broader geographical territory. They also stipulate that the award applicant shall not receive financial support from any official or governmental authority but shall rely on the contributions from individuals and institutions.