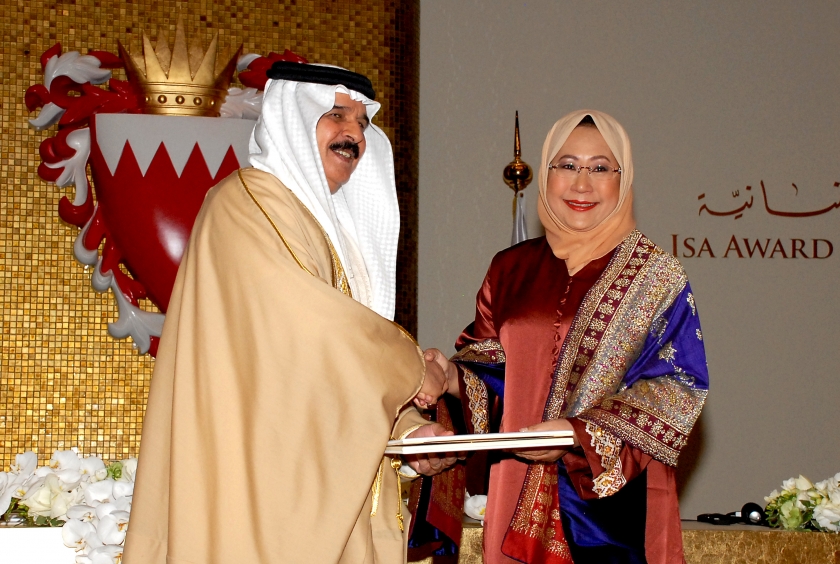 The official award ceremony was held under the patronage of His Majesty King Hamad Bin Isa Al-Khalifa and His Royal Highness the Prime Minister, Prince Khalifa bin Salman Al-Khalifa. The event was attended by senior officials and VIP’s. The ceremony included a performance by the Royal Band, speeches by HRH King Hamad Bin Isa Al-Khalifa, HH Deputy Prime Minister Sheikh Mohammed Bin Mubarak, Professor Jan Paulson, head of the Nomination Committee, and the laureate, Dr. Jemilah Mahmood. During the ceremony, attendees were shown an exclusive Isa Award documentary on the life and legacy of Sheikh Isa, whom the award is named after, and a unique film on the life and achievements of Dr Jemilah Mahmood, both of which will be aired on Bahrain TV in the upcoming days.

Dr. Mahmood was selected as the laureate of the first edition of the Award due to her continuous humanitarian work, which has included the establishment of a maternity and health center for women in Darfur, Sudan, in 2004. The center is now run by a local team. Under her leadership, MERCY Malaysia also rebuilt 13 health centers in cooperation with the Health Ministry in Myanmar, after Cyclone Nargis in 2008. After the tsunami disaster in December 2004 and the destructive earthquake that ensued in March 2005, Dr. Mahmood also helped the people of Banda Aceh, one of the poorest communities in Indonesia. She drew up a plan to provide the necessary healthcare, helped rebuild two health centers, and renovated the island’s Gunung Sitoli Hospital.

Following the award ceremony, Ali Abdullah Khalifa, the Award’s Secretary General, said, “The honoring of Dr. Jemilah in today’s event is the culmination of two years of continuous work that included intensive coordination among the Award’s General Secretariat, the Nomination Committee, the Jury, and other parties involved in humanitarian activities throughout the world. Today, Bahrain was able to meet Dr. Jemilah in person, and she showed what she has shown us before, her limitless passion for serving humanity, her consistent vision for empowering societies in the short-term as well as the long-term and her willingness to put her life on the line to make the world a better place.”

During a four day visit to Bahrain, Dr Jemilah has met with a number of senior Bahraini officials including, His Highness, Deputy Prime Minister, Sheikh Mohammed Bin Mubarak Al-Khalifa, Chairman of the Isa Award board of trustees, Dr. Fatima bint Mohammed Al-Balooshi, Minister of Social Development, Ali Abdulla Khalifa, Secretary General of Isa Award for Service to Humanity and the Malaysian Ambassador, HE Ahmed Shahzan Abdulsamad.

Established by a Royal Decree in 2009, the Isa Award honours individuals and organisations around the globe that have provided outstanding services to humanity regardless of their race, religion, culture, beliefs, or locations. The award covers 11 categories including disaster prevention and relief, education, and human tolerance. The laureate of the biennial award will receive a gold medal and a US$1 million cash award. The award is the first of its kind in the Middle East in the field of honouring service to humanity.