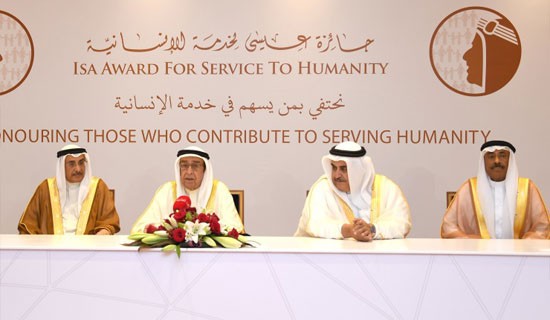 The result of international jury efforts and intensive field research to select the winner.

The EDHI Foundation in the Islamic Republic of Pakistan was awarded the Isa Award for Service to Humanity (fourth edition 2018-2019). The Board of Trustees of the Isa Award for Service to Humanity is chaired by His Highness Sheikh Mohammed bin Mubarak Al Khalifa, Deputy Prime Minister. The Award was given following recommendations by the International Jury, which selected the EDHI Foundation after shortlisting several qualifiers from different countries. The General Secretariat of the Award in cooperation with the jury conducted intensive field research covering the work sites of the Foundation, reviewing methods of providing services and verifying the records of achievements.

The US$1 million award, along with a medal of pure gold and a high certificate of appreciation, will be delivered at a grand royal ceremony honored by the presence of His Majesty King Hamad bin Isa Al Khalifa, King of the Kingdom of Bahrain. It will be held on Tuesday afternoon at the grand celebration hall of the Isa Cultural Center in the Al-Fateh Compound in the capital Manama. The event will be attended by high profile, world–renowned figures, including official and community delegations.

The Isa Award for Service to Humanity achieved a great deal of success in its three previous editions, showing remarkable humanitarian work and achieving distinction amongst international awards. It emphasizes humanitarian openness to various races and religions and avoids politics and conflict of any kind.

The Isa Award for Service to Humanity, which is given every two years, was established in 2008 by a Royal Decree from His Majesty King Hamad bin Isa Al Khalifa, the King of Bahrain. It is in commemoration of his father, the late Emir His Highness Shaikh Isa bin Salman Al Khalifa, and in recognition of individuals that have dedicated their lives to humanitarian work.

The winning institution for this edition of the award is the largest Pakistani charity foundation, known worldwide for its humanitarian work. It serves all human beings from all races, religions and nationalities without distinction. It was founded by Abdul Sattar Edhi, a well known Pakistani philanthropist, ascetic, humanitarian, and social activist. He is known as the “father of the poor” and “the angel of mercy”, and has been repeatedly nominated for the Nobel Prize for Peace.

Highly revered and respected in his country, Abdul Sattar Edhi dedicated his life to serving the poorest people. He established a giant charity foundation that sponsored the building of maternity hospitals, morgues, orphanages, shelters and a nursing home. Until his death on July 8, 2016, he dedicated his life and that of all his family members to the service of people.

At the beginning of his life, he was engaged in his father’s textile trade. But he soon abandoned his father’s profession and, with his friends, set up a small one room clinic in the Methadar District of the old city of Karachi. He owned a small ambulance car and started driving around the city, transporting patients and those wounded in accidents to hospitals. From this humble beginning in 1951, he succeeded in establishing an institution that attracted thousands of volunteers who donated their time and effort to helping others.

His sons and daughters currently manage 300 emergency centers spread across Pakistan. They operate a 24-hour fleet of 1500 ambulances, 28 rescue boats, and three small ambulance airplanes (two of which are rented and the third belongs to the Edhi’s). The Foundation receives 6,000 calls daily asking for ambulance service, which are answered by 200 call center persons.

The Edhi Foundation has orphanages attached to primary and secondary schools; homes for the disabled, rejected and displaced children, and drug addicts; and shelters for abused women. There are also maternity centers, family planning centers, training institutes for nurses, blood banks, a tuberculosis clinic and a tumor hospital.

The foundation also provides food and other necessities for prisoners. There are 15 centers under the name of “Beitna” that provide shelter services to needy children, and runaway and psychiatric patients. It also runs a large number of childcare centers for children of unknown descent, under the name of “Cradle of Children”, where approximately 20,000 children are housed. This is in addition to a number of orphanages that are homes to 50,000 orphans.

The Foundation runs 330 care centers in Pakistan’s rural and urban areas, providing food, shelter and rehabilitation for abandoned women and children, as well as medication for mentally ill patients.

The Foundation has provided relief work in Africa, the Middle East, the Caucasus, Eastern Europe and the United States (during Hurricane Katrina in 2005).

Before his death in 2016, the late Abdul Sattar Edhi founded the 50-kilometer Edhi project, which aims to provide essential services to rural and urban residents. The project focuses on saving the lives of accident victims on the internal and external roads of all areas of Pakistan.

The late Abdul Sattar Edhi and his charity foundation have received tens of local and international awards and honors including a doctorate from the Karachi Charity Foundation with the Excellence decoration, the Human Rights Award from the Government of Pakistan, the Agassai Jar Award, a prize from the Lenin Peace Foundation, the International Foundation for Peace and Brotherhood Foundation Award, and the Hamdan Bin Rashid Al Maktoum Award for Humanitarian Medical Services from the UAE.